Alhamdulillah, I am no longer in a state of indecision; the annoying habitual Gemini state. I have controlled the evil twin, the ying from the yang. I now know what to do. My istikharah yielded a VERY CERTAIN result. And I am no longer in doubt as to what is the best course of action for me.

Prior to the istikharah, I have actually listed all the pros and cons of working here as opposed to working back in Malaysia. And I know exactly what I SHOULD choose base on that list. And my heart too was inclined towards following the conclusion from the list, but knowing me, I could NOT commit to a decision. Everytime I wanted to say “Yup, this is it! I am doing what’s best based on a very logical conlusion from the list!”, my heart would be assailed with bouts of doubts. Temptation from the other side of the fence beckoned; and I find their seductive wiles irresistable. So, I paused and deliberate longer.

When I looked at the list again, the logic in me spurred me on to decide now, and put a stop to this consistent state of indecision. The logic in me said “You KNOW what you should do. You say you are logical, determined, brave and courageous…what’s stopping you? Or maybe your words are just without value?”

When I decided to do istikharah, I told myself that whatever decision I might get,I would follow it. And then pray for my heart to stay steadfast.  Jangan berbolak-balik lagi.

When I first did my istikharah, I was not sure what I felt. There was no overt signs or indications of what I should choose. So again, I could not commit to a decision because the signs were not all that clear.

My second istikharah was done with a bit of improvisation last night. I took two pieces of paper and wrote on them a choice each; going back or staying here. I folded the papers neatly and put them in a box. That night, I prayed the istikharah prayer, and slept soundly. When I woke up in time for Subuh, I prayed as usual and ask Allah to help me pick the BEST decision.

I put my hand inside the box; toying with the two papers; pushing them here and there. And at last, I grabbed one piece. THE PIECE that would make all the difference.

Now, I can commit. NOW, I know that my heart has been right all along. I guess, I had known what to do but all I need was the push. And Allah has given it to me.

Now that I’ve been given the certainty that I covet, whatever happens I will be content to face it. There will be no regrets.

Well, knowing me, maybe I would grunt and complain when things get too hard. But deep inside, I would have known that this decision is the best for me. And I would be motivated to continue along this path that I have chosen. It would make all the difference.

P/S: I would like to express my heartfelt thanks to a friend who had given me the idea for my second istikharah. It’s the certainty that I covet, and I got exactly what I wish. No biased! 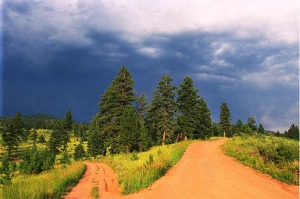 I shall be telling this with a sigh
Somewhere ages and ages hence:
Two roads diverged in a yellow wood, and I —
I took the one less traveled by,
And that has made all the difference.

Pages and Pages of Life

Verses left for the author

The Rhymes I Live By:

1)If your good deeds please you and your bad deeds upset you, then you are a mu'min.

2)Verily, in every difficulty, there is relief.

4)"Never do I argue with a man with a desire to hear him say what is wrong, or to expose him and win victory over him. Whenever I face an opponent in debate I silently pray - "O Allah, help him so that truth may flow from his heart and on his tongue, and so that if truth is on my side, he may follow me; and if truth be on his side,I may follow him." Imam Al-Shafi'i.

6) The pens have been lifted and the ink has dried...

In Allah We Put Our Trust

"Verily, with every difficulty there is relief.
So tie your camel first, then trust in Allah.
ALWAYS!!"

The Days Pass So Swiftly

Afiza Azmee is an individual, and My Life Poetry That May Not Rhyme is a personal blog. The opinions expressed here are the products of the author’s thinking process. And they do not represent the thoughts or opinions of anyone related to the author and especially NOT the author’s employer (the Ministry of Health).

Author reserves her rights to a change of opinion in the future. She is, after all, an open-minded person.

All images in this blog, unless stated otherwise, are courtesy of Google Images. Thank you, Google.

Author welcomes your comments, your disagreements, your views about any of her posts in this blog. But she reserves her rights to delete those that contained profanities, vulgarities, unrelated topics, and annoying anonymity.